Disclaimer: For anyone who has read Guilhem Bertholet’s reaction to Newsweek’s “Fall of France” article, I’m probably what he’d call a French-Defender. You can’t say I didn’t warn you.

By now, just about everyone has heard of that Newsweek article that all the French are allegedly going nuts about. You know, the one that states that all the entrepreneurs are leaving France since Hollande took over as President because of the whopping 75% tax rate. Yep, yet another article that plays on that over-played joke that the French don’t have a word for “entrepreneur” and struggles to find a French equivalent for Bill Gates or Richard Branson. Yawn.

Way too many page views for that kind of merde.

When I first read Janine di Giovanni’s piece, the only real thing that came to mind was “pathetic.” I mean, she clearly was going for a cheap turn-up-the-page-views strategy, otherwise maybe she would have found the time to fact check. That way, she would have discovered that there IS a French equivalent to Richard Branson and his name is Xavier Niel (and if for any reason she doesn’t like Xavier, she has a few others to choose from). Le Monde published a great piece calling out a number of her errors. And just in case that wasn’t enough, Huffington Post’s Anne Sinclair also shared her thoughts. Some people suggested that it would have been sufficient to run the piece by the French owner of Newsweek – but he seems to be more preoccupied and amused by the debate that it’s sparked. In other words, yay page views ! And that’s really all there is to it.

Ok, now let’s move on. And for any struggling journalists, try dropping in a French-bashing article whenever your page views are down and your creativity is low.

But no, the problem isn’t Newsweek. 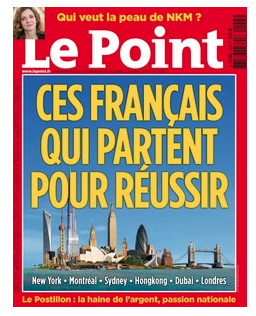 But to be honest, before the Newsweek article came out, there was another article that I found a little surprising. In fact, it’s a series of articles written in a French publication and shockingly it doesn’t do any French bashing. Or does it? It happens to be the feature in last week’s edition of Le Point, titled “Ces Français qui partent pour réussir.*” Translation: these French that leave to succeed.

So here’s the deal: other countries – and I’ll use the UK and the US as examples since I have lived in both – are trying to develop ways to attract the best international talent from around the world. But France is obsessed with trying to find a way to keep its own entrepreneurs at home. It’s a completely different mindset; France is trying to propose measures that simply appease French entrepreneurs and keep them from leaving, whereas other countries are trying to go above and beyond all other countries to make sure the world’s entrepreneurs know where they would have it best. It’s what I was trying to get at in my article Afterthoughts on Lunch with the French President. France needs to compete with the others, not compete with itself.

Should you stay or should you go?

Plus, can you imagine coming across an article in an American publication titled “These Americans that leave to succeed” ? That would be downright shameful. But somehow, in France, it works because the debate is about keeping French entrepreneurs in France rather than attracting foreign talent. And funny enough, attracting foreign talent would probably also keep any French entrepreneurs that are considering immigration at home.

A small step for entrepreneurs, a large step for France.

Going back to di Giovanni’s article, I have to say that her timing could not have been better. She happened to publish that piece at a time when the French ecosystem is actually doing quite well. While the government may not always “get it,” they are now listening to entrepreneurs and encouraging entrepreneurship more than ever. Or at least they’re trying to seem like it. And they’re also aware that France’s ecosystem needs more visibility outside of France – which is why Minister Fleur Pellerin launched La French Tech, including €15 million dedicated to promoting the ecosystem internationally. You can read more about it here.

Wait, it gets better.

But aside from the government (because let’s face it, most governments can be slow and lack innovation), there is a lot going on in France – especially in the startup ecosystem. Challenges published an article in August of last year outlining some of the wonderful things happening for the local economy, with a majority of it focusing on tech and startups. Like Criteo’s IPO, Xavier Niel launching his free coding school and announcing the biggest startup incubator in the world, and a handful of other startups getting acquired by companies like Adobe, Google and more. That’s just a few examples. Oh, and did we mention France counts 4x more businesses created per year than the G7 average? Which could be in part due to the auto-entrepreneur scheme.

That’s a Churchill quote. And if you think any entrepreneur gives up just because the going gets hard, you’re wrong. Otherwise you’d have Airbnb, Uber and a number of America’s darling startups closing their doors because – let’s face it – the US hasn’t always been super innovation-friendly either. French entrepreneurs are getting stronger. The community here is learning what to do to be heard. More and more attention and resources are also being contributed to build the local ecosystem. Things are only going to get better. So I think it’s time to do away with some of these really old, repetitive debates and out-dated opinions about France’s entrepreneurs. And in the meantime, France should stop worrying about who is leaving and start dedicating itself to those who could be arriving.

*Truth be told, it’s actually a really interesting article on French entrepreneurs succeeding worldwide, including a fabulous piece on Jérémie Berrebi (Kima Ventures) and another on Renaud Laplanche (LendingClub).