Last week, as many of you know, I hosted the first of a 3-part conference series on innovation called Les Matinales. We had some incredible speakers, from companies like Airbnb, Uber, Stardoll, Le Petit Ballon, Eyeka, Skimm! and more. And we’ve got 2 more editions lined up for September! Since the event was ever-so-slightly outside of Paris (Ivry-sur-Seine), many people tuned in via live stream to watch. But for anyone who didn’t manage to attend virtually, here’s a quick round up of what happened… 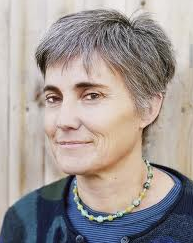 Zipcar-founder Robin Chase was perhaps one of my favorite speakers. After Zipcar, she decided to hop across the Atlantic to create a new car sharing platform, Buzzcar, in France. Why? Because – according to her – France is leading innovation in transportation. She cited a few examples, including the high speed train, Airbus and even Velib’ bike sharing services. While we’re at it, did you know that France invented the oldest successful human carrying flight technology, the hot air balloon? Anyway, Robin also didn’t hesitate to mention that perhaps even Zipcar would have been better first-launched in France or Europe.

Carpooling platform Blablacar serves as another good example of how France and Europe are good markets to launch a new transportation-related service. I’ve written about Blablacar quite a bit, including how it was able to profit from the horrors of the Icelandic volcanic cloud on more than one occasion. Today, the Accel and ISAI-backed startup is present in 4 different European countries (UK, France, Spain and Italy) and offers a terrific low-cost solution, especially for distance travelling.

Another French company that’s been quick to expand is French Birchbox competitor, Joliebox. Launched in 2011 and funded by France’s Alven Capital, the young Joliebox was quick to acquire UK competitor Boudoir Privé and  Spanish competitor Glamourum. Despite the aggressive competition from The Samwer Brothers’ Glossybox, the company is doing very well – perhaps because the French have a certain savoir faire when it comes to cosmetics? CEO Quentin Vacher revealed that the company recently expanded its offering to men and…babies! And another made-in-France box that is doing very well is that of MyLittleParis (known as Mylittlebox), but they’re not strictly cosmetics.

From rocker to wine expert?

Quick, which of these cofounders is a former musician?

By now you probably know that I have a little crush on Le Petit Ballon. And not just because of the way they are revolutionising the traditional French wine industry. I absolutely love the story of cofounder Martin Ohannessian, who went from being a musician to launching this Birchbox for wine. Honestly, who says rockers can’t become wine experts? In the same way that Joliebox benefits from French savoir faire when it comes to cosmetics, Le Petit Ballon offers wine expertise from the guys who invented the stuff. It’s the perfect way to learn to taste wine like a pro without raising your pinky.

Uber: Oh yeah, we were born in France.

For Uber, turns out the grass may be greener on THIS side.

Despite all the trouble that Uber has gotten over in the US – including what looks like another recent headache in Washington DC – the service that is essentially “everyone’s private driver” has never gotten any flack in France. And maybe there’s a reason. For anyone who doesn’t yet know the story behind the startup that more or less brought cabs to California, the founders claim they idea for the company actually came from a trip to Paris. Uber may have its work cut out for it in London, especially with local rivals like Hailo (Not sure if they’re really rivals? Watch this…). But now with UberX there’s no telling what will happen… 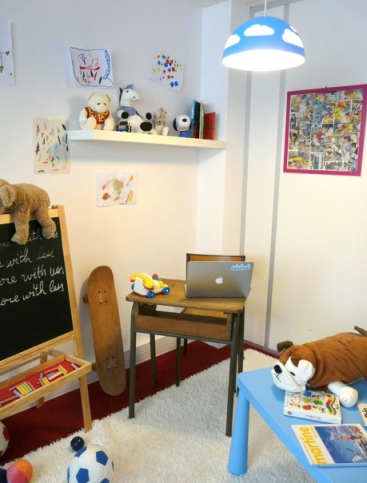 Rumor has it that Airbnb was searching for a Director for its France office for quite some time – which isn’t uncommon for US companies expanding into France and other European countries. Twitter, Path and Foursquare are likely to be up next to face the challenge of finding the right person to take on the challenge. However, Airbnb did ultimately manage to secure a killer Director for its French office, Olivier Grémillon. The Ashton Kutcher-funded startup rolled out a very ambitious expansion plan in Europe last year, with all European operations being based out of Berlin. Grémillon says that the French office took the longest to set up, primarily for administrative reasons. But that doesn’t mean the team is lingering behind. Given that France is one of the world’s hottest tourist destinations, the site already had tons of local listings prior to the opening of the office. And now he’s going strong with a 20-person team in place.

Can you spot the French one?

The Swedish company that essentially lets girls develop and dress their own virtual avatar in hopes of becoming famous has just opened up in France. Just as with Airbnb, the company had tons of local users prior to the launch. While you may expect this product to be popular with a younger age range, it turns out that the average user is actually around 16. And if you’re wondering what sets the French users apart from the rest, it’s their sense of fashion (shock!). Seems French Stardoll users actually love being able to design their own clothes, which is apparently not the case in all the countries where Stardoll is present!

French mobile payments startup Skimm! wants to turn your smartphone into a payments system, à la Square or iZettle. Except Skimm! wants to offer users a way to do so without any extra hardware. The now 11-person team launched last year and is getting ready to release a new version of the product later this fall. Skimm! cofounder Antoine Sakho also confirmed once again his belief that credit card fees were friendlier in France than in the US. 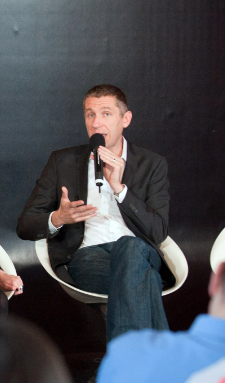 French co-creation platform Eyeka just happens to be cofounded by one of my favorite people in the French tech scene, Mr. French Digital Champion, Gilles Babinet. CEO François Pétavy, who joined the company roughly 2 years ago, told a few stories of how companies are using his platform to innovate with their fans. By leveraging Eyeka’s creative community, some big name companies – like Lego – have been able to turn the corner and reinvent themselves. But that’s not all. Eyeka users have also been able to find jobs at top companies by contributing to different projects. American Idol for the digital creative industry?

Even though LeKiosk had not yet officially launched in the UK in December, 25-year-old cofounder Michael Philippe didn’t hesitate to mention at LeWeb in Paris that the company was already working with 100 different UK partners at the time. The French rival to Apple’s tablet-based newstand has been downloaded over 500,000 times since its launch in 2011. LeKiosk finally launched in the UK last month (rebranded à l’Anglaise) and allows users a monthly bundle of 10 different magazines or newspapers for just £10 or €10.

Marc Rougier: “Now is a great time to be an entrepreneur in France!”

Serial entrepreneur Marc Rougier has been an entrepreneur in Canada, the US and is now back in France running Scoop.it (formerly known as Goojet). The man who sold his previous company, Meiosys, to IBM in 2005 is very honest when it comes to the challenges of French entrepreneurs but says that now is the best time to be an entrepreneur in France. And many entrepreneurs and investors would agree. There is a new-found appreciation for entrepreneurship on this side of the pond and Europe, as a whole, is clearly moving forward.

The next edition of Les Matinales will take place on September 4th and cover startup funding (and not just VC!) in France. Tune in to find out what local startups are doing to get the money they need – and sometimes they get very creative. Then, on September 18th, we’ll be hosting a pitch event at La Cantine where 8 selected startups will pitch in front of investors from Partech, 360 Capital Partners, ISAI, Serena Capital, Wellington and more. If you’re a startup under 3 years old that happens to be raising, apply here before August 15th.