On June 30th, France officially lay its infamous minitel network to rest. The box connected French households before the arrival of the Internet is said to have inspired Apple’s Steve Jobs – which shouldn’t be a shock to anyone who knows the country’s history of inventiveness and affinity for beautiful design. Now, as the rest of the world drools over gadgets, including BERG Cloud’s Tiny Printer, Pebble Technology’s E-Paper watch or Google glasses (thoughts?), you may be wondering what gadgets are left on the French menu. Well, here are a few noteworthy French gadget companies to keep an eye on.

If you’ve ever seen someone tweet their weight, changes are you already know the company that makes “smart and connected objects.” Launched in Paris in 2008, Withings’ first product was the “smart body scale,” used by the likes of Michael Arrington. The startup came out with 2 new products last year – including a connected sphygmomanometer (aka blood pressure meter) and intelligent baby phone. All Withings’ products have clean, classic Apple-like designs that sync with your iPhone so you can carry them around with you wherever you go (in fact, products are also sold in Apple Stores).

So, what’s up next? La Smart Baby Scale, which the Withings’ CEO Cedric Hutchings announced at this year’s Consumer Electronics Show in Las Vegas and will be released later this year. For more info on the release, sign-up here.

If you’re a vintage electronic junkie that owns a record player or a polaroid camera, chances are you will probably like Lekki’s colorful vintage electronics. The company “remasters” classic electronic devices – including the Nokia 6210 and most recently the 1989 pocket Gameboy in a variety of colors, including bright orange, yellow, green and more.

Did a Nokia ever look so good?

While Lekki is not actually designing, innovating or building new gadgets, they are recycling and revamping old gadgets in an original way. Keep an eye out because maybe via Lekki the minitel will make a sexy, colorful comeback. 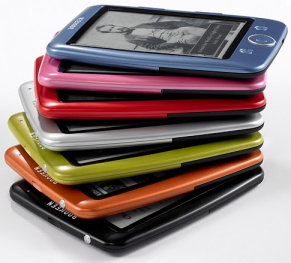 Bookeen’s Cybook Opus in all 7 colors.

Launched by some of the team that worked on the original Minitel, Bookeen essentially produces competitor e-book devices to Amazon’s Kindle. Launched in 2003, Bookeen currently offers 4 different e-readers – including the 5-inch Cybook Opus, which comes in 7 different colors. Even though Bookeen’s Cybooks cost more than Amazon’s Kindle, they’re selling well in over 50 countries around the world. Who would have thought?

Back in my TechCrunch days, I wrote about how Paris-based PlugNSurf was developing a pocket Freebox called the Wobe. The company launched in 2009 makes a tiny, 160-gram, intelligent router that automatically connects to the cheapest network and distributes wifi to up to 5 devices. So for less than €120, you can take your internet with you wherever you go and hold it in the palm of your hand.

Smartgrains first caught my attention when they won the Guidewire Innovate 100 pitch competition in Paris in 2010. The company develops an intelligent parking system that leverages sensors to alert someone when a spot becomes available so they don’t need to circle around for hours.

ParkSense is smarter than it looks…

Once a spot becomes available, SmartGrain’s ParkSense system notifies the driver via mobile application of where they can park. No wonder they call it smart. The company’ launched its service in Issy-les-Moulineaux, just outside Paris, in 2010 with more cities to come. Oh, PS: youngster CEO Cedric Gepner has been shortlisted for next year’s 13 hot French entrepreneurs under 30.

Siri says you can park.

Not to be confused with the makers of the Michael Arrington robot, Gostai’s Jazz goes where no robot has gone before. The 20-person startup was launched officially in 2006 and creates a versatile robot that can be used for events, the office, health and more – to buy or rent. The wifi connected Jazz also has a battery life of 5 hours and runs on Linux.  I actually remember seeing one of Gostai’s robots on the métro once – not riding alone, not to worry. I guess if you want a good-looking, French robot, this is it.

A new kind of hardware, ReaDIYmate is a Kickstarter-funded project that lets you build wifi-enabled and programmable robots out of paper. Well, you don’t need to use paper. You can use wood, lego, modelling clay, whatever. But better than the aesthetics is the functionality. You can essentially program your little robot to move or play music whenever you receive an email, whenever someone new follows you on Twitter or likes something you did on Facebook, etc. This is creativity à la française at its best!

Now I’m sure there are other French gadget companies that deserve to be mentioned in this post – so feel free to add to the comments. In the meantime, put your minitel away.