Skip to content
Posted on September 5, 2010 by Roxanne Varza

A while ago, I bought a netbook – a Sony Vaio, to be specific (mainly for price, removable battery, size and pixel reasons as a traveling blogger). I tweeted my purchase, not really expecting anyone to care all that much. It was more just to pass time as I waited in line at the FNAC. But turns out quite a few people did care. Perhaps there are also people that also care that I use Jolicloud as my netbook OS (virtual hi-five to Tariq), have a Nikon Coolpix digital camera, that I don’t own an iPad (yet) or an iPhone4 and that I have actually purchased songs off of iTunes – sad, but true.

Now, maybe you’re wondering what apps I have on my iPhone?

So here are the stats: I currently have some 108 applications on my iPhone and I delete and download rather regularly. I prefer not to pay for the app unless it’s really something special – which means yes, I have purchased apps. The most expensive app I have ever bought is probably in the €4.99 range.

I’ve got a number of apps for news in English and French, including The New York Times, Le Monde, Les Echos, Challenges, NPR News, The Financial Times, The Wall Street Journal, etc. Then I’ve naturally got to keep up with my tech blogs in French and English, which means I’ve also got a few names like TechCrunch (naturally), VentureBeat, Presse Citron, Korben, Journal du Net, Journal du Geek, Guy Kawasaki, etc. And then I’ve got Facebook, Linkedin, Skype and Yammer (to communicate with the TechCrunch gang – by the way, I just adore Yammer). I recently added Viadeo, even though I’m not particuarly active on that network, because it is hard to tell whether Linkedin or Viadeo is the network of preference for the French scene.

For Twitter, I use Twitter’s app – I actually tested a whole ton of Twitter client apps (Echofon, Seesmic, Twitterific, etc.) on the train from Marseille to Paris and happened to like Twitter the best, even though there are still a few missing features and it just started crashing on me yesterday (bad Twitter, bad). Seesmic was a very close second – so I keep it on my phone just in case. The Twitter app that disappointed me the most was Echofon, which happened crashed on me when I was at a conference. As a blogger, that is perhaps the 2nd worst thing to forgetting my laptop charger. I should keep this in mind if the Twitter app I currently use doesn’t get its act together.

An American in Paris.

2 apps that have dramatically changed my life are Pinger Textfree and iConvert. I use Pinger to text everyone in the US for free when Orange was trying to slap on extra euros to my monthly bill for international texting (I’m a huge texter). And iConvert I use for anything from keeping tabs on the euro/dollar exchange rate to properly cooking in grams and milliliters.

Apps I use to get around Paris and such include the standard Google Maps and RATP lite – a free application which maps the Metro lines. I’ve also got the Voyages-SNCF application on my phone for TGV tickets and the Velib’ application for the nearest bike-share stations – even if I’m not the biggest Velib user on the planet. 2 more apps I recently added just to make my life easier are Comuto‘s carshare application and Taxi Bleus for taxi reservations – but I haven’t had an opportunity to actually use either of their services yet. And of course Pages Jaunes, aka the Yellow Pages, is always good to have if you’re looking for an address.

I’m the Mayor of nowhere.

Travel and news-related apps are probably the 2 biggest categories of applications on my iPhone. I’ve also got a few geo-social apps, like Submate, Foursquare and CheckMyMetro – which is the Foursquare for the Paris Metro. I should have Plyce too but the truth is, I’m just not a huge user of geo-social. Well, not yet. Anyone who is my friend on Foursquare knows this. It’s kind of like how I’m not a huge user of online chat (Gchat, Skype, Facebook, etc.) – it’s nothing against the service but more the fact that I use it for one-off situations rather than on a regular basis.

When it comes to exploring Paris, obviously I love the MyLittleParis app  for discovering hidden places and things to discover (yes,  I covered this for TechCrunch). For more classic touristy info, I downloaded Paris à Pied – the free app is supposed to provide info on museums, parks, etc. but hasn’t really done much but crash on me several times. Not très cool. Then again, there are other paid apps that are probably better quality but I didn’t bother to look into it. I do find it odd that the Louvre is one of the few local museums that actually has its own app though. I guess when it comes down to it, there is really no better app for discovering Paris than the Guide du Routard’s app (€4.99) – I especially like section on free stuff to do in Paris.

Not exactly in the bag.

If you’re thinking to yourself: wait a minute, she’s got no shopping apps on her phone – you’re right. There are naturally tons of apps for shopping (Vente-Privée‘s app is a huge hit) but this hasn’t really sunk in to my system yet. If I’m going to buy anything on my phone for now, it’s probably going to be a TGV ticket.

I did download a few apps that are pretty much France-only apps. One of them is the Ticket Restaurant app, which lets you see which places near you accept Ticket Restos (which I discussed in an earlier post). There is also Clopclop (which recently came out only for iOS4) – a similar idea but for finding cigarettes or open tobacco shops. I’ve also got iPharmacien for finding a near-by pharmacy – but haven’t used it yet (PS: if anyone has good medical apps, let me know).

French food is a must so I’ve got a few apps for restaurants and recipes. I bought Marmiton’s application because I just love the recipes on the site. The application is also just beautiful and insanely helpful while grocery shopping. Then I’ve got the Guide de Restaurants (by lintern@ute). And for reservations there is TableOnline (am I going crazy or are Restopolitan and La Fourchette MIA from the App Store?). I’ve got Qype, Yelp and Dismoiou on there too but haven’t really dug into using them yet for social recommendations – but I will. According to Alloresto’s website, there is an iPhone app for take out but it isn’t in the App Store… 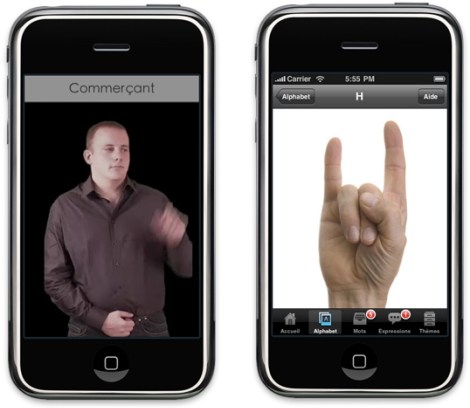 Pass the time away.

Of course the geek in me has a few games and rather stupid apps too – I naturally have Tetris and Fat Booth and a couple other random games that I hardly use. I have a few education apps as well – one on sushi, one on French sign language and the Corsican language app I cannot stop talking about. I’ve obviously got dictionaries, translators, a few quiz apps (history, geography, etc.) and Wikipedia on there as well.

The one app (and service!) that I am perhaps most sad about not being able to use in Europe (aside from Netflix, which has very little to do with iPhones) is Pandora Radio. I was a HUGE Pandora user in the US. So then you’re probably wondering what music application I have on my phone – Deezer? Spotify? Answer: both. Although I’ve been a Deezer user longer than a Spotify user, I’ll admit it. I also have an iPod for my iTunes – which I don’t play on my iPhone to keep it’s rather pathetic battery in shape.

The price is right.

2 great little apps that I have on my phone, Pikadeo and Mobiletag, let you get more info on what cinema is playing a movie by photographing a poster or which store sells a particular item for the best price by identifying the bar code. Both French companies, both fabulous applications. But not 100% fool-proof, FYI.

My all-time favorite application is Allociné’s iPhone app – for movie times, locations, tickets…and previews ! Even if I don’t have time to go see a movie, at least I can easily keep up to date with what’s playing and effortlessly watch the trailer.

A very-close 2nd-favorite application is either Shazam or Melodis’s Soundhound – which identify random songs you hear playing in bars, restaurants, etc. I hate that they’re both capped at 5 free songs/month so I like to switch between the 2 (*insert evil laugh here*) to get 10 songs for free. 🙂 Between the 2, I actually prefer Soundhound because at least there are ways you can EARN more free songs without buying packages or subscriptions. Clever.

Obviously I didn’t name all 108 applications on my phone – but I definitely covered a fair chunk of them. I’d be interested to know what absolutely essential applications I forgot – especially for someone living in Paris. Feel free to add to the comments and let me know…